iSad: Why I Can't Get Excited Over The Latest iToy

As regular readers of this sometimes neglected blog know, I'm a gadget guy. The newer the gadget, the more I want it. And for my gadget habit, Apple is often my dealer of choice: not only do they make some primo gizmos, but they do it with such style, such aplomb, it's hard to imagine any resistance. So, it's with some shock that I find myself strangely immune to today's launch of the latest Apple world-changer, the iPad.

I can honestly say I simply don't get this one. For those that somehow have managed to avoid the hype machine, the iPad is pretty much a huge iPod Touch, about the size of a hardcover book and Apple-svelte. It's not a laptop, nor a game machine: it's a brand new category of...what? See, this is my issue: I don't understand what problem the iPad is trying to solve. The iPod solved the UI and synchronization issues that held MP3's from going mainstream. The iPhone made your phone a one-stop device, and finally launched smartphones from geekery. The iMacs took away the component aspect of computers and just made them easy to use appliances. And that's just Apple products; outside the walled garden of Apple-land, there are plenty of other solutions: the Flip video camera made camcorders a one button, all digital, $199 affair that made YouTube happen. Netbooks freed the shoulders of laptop luggers for a cheap, light device for travel and on the go computing. The list goes on...

So what problem is the iPad solving? It adds a rich e-book reader. Ok, but, unlike me, most people hate reading on the LCD screen; that's why the Kindle with it's e-ink, has been a tremendous success. Will the iPad magically remove the headaches people complain about from ebook onscreen reading? How about movie or TV watching? Sure, but remember: it's $500 for only 16GB of memory. For half that price, you can get a netbook that will play all the same content, with iTunes, with about 20x the amount of memory. Music? Uh...did I mention that it only has 16GB of memory for $500? Your average iPod has that amount, for a lot less, without apps and other content competing for the memory.

Ah, but it's all about the apps, they say. Ok, this I dig: I'm an iPhone user with about 100 apps; I get apps. So, the form factor of the iPad makes for some new killer apps. What are they? Well, Gizmodo's been doing some reviews, and here's a few: 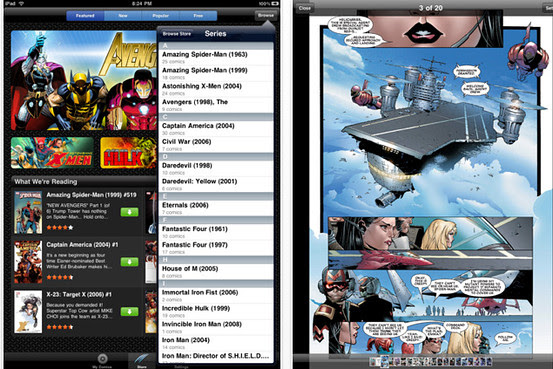 - It's an amazing comic book reader. Marvel Comics released an iPad app where you can see the whole comic on screen! In actuality, it's a rebranded version of Comixology just for Marvel titles, but it's still a good one. I have several issues with this one. First, yes, having the whole page onscreen is nice. I like that experience so much, I subscribe to Marvel's digital comics, and read them on my netbook. Like the iPad, you can choose to read page by page, or panel by panel; most folks go panel by panel, as it adds a more dramatic feel. In fact, the panel is perfectly sized for...the iPhone. Not the iPad; the iPhone. And that's where I want this. Oh, and price? I pay $60 a year for access to Marvel's digital comics: all you can eat. The iPad? $1.99 an issue. That means I'd have to pay about 25x more to read it on the iPad?

- Watch movies from Netflix! Stream ABC TV shows! Um...yep, I can do that with my $199 netbook. And I can even watch content from Hulu, NBC, etc...which you can't on the iPad.

- You can play Scrabble, and, if you have an iPhone, you can use your iPhone as a letter tray! Ok, granted, that's a cute feature. One you just spent a minimum of $700 to use. That's one hell of a triple word score.

Oh, and about those apps? Check out this tidbit from Gizmodo's guide to setting up your iPad:

"One thing you'll learn about your iPad is that you run out of space a lot quicker than you think. iPad apps are a lot bigger than their iPhone counterparts, and they start adding up quick.

The easiest thing to cut back on, for now, is media. We recommend against automatically syncing anything for now, because a bunch of TV shows and podcasts that hardly make a dent on your laptop's hard drive could eat up your whole iPad."

Yes, you just spent $500 on a dedicated device for content consumption that you have to start rationing what content you can and can't enjoy. Well done. Contrast that with a $199 netbook with a 320GB hard drive that runs Flash, has a video camera, and runs Apple's iTunes, as well as Amazon's Kindle Reader or Video On Demand. Or how about a $300 iPhone with twice the memory of the basic iPad that can fill up with apps, movies, tv, and music without flinching, all while being a phone, video camera, and digital camera?

I keep looking for the killer application of the iPad, but it's not clear to me yet. Cory Doctorow of Boing Boing put it best to me: it feels like the second coming of the CD-ROM: flashy, interactive, rich media content...but vapid. Please, don't get me wrong: I want the iPad to succeed, as I view it as one step closer to the future. But unlike the devices that came before it, the iPad seems to me to be an answer in search of a question. Let's hope the question gets asked soon.

As gadget man of my family they are all shocked I don't have one yet. But I have a smokin' fast laptop and a ultraportable iPhone and a Kindle to read on. I am pretty much out of space to add a device that doesn't remove one of those...
Tuesday, April 6, 2010 at 4:58:00 PM PDT