Local Deals Need To Be Local

By Unknown July 03, 2011
AT&T recently touted they were adding deals to AT&T Wireless subscribers. Thanks to the slightly creepy feature that the network knows where your phone is, they would helpfully send texts with deals at retailers "nearby." I signed up, figuring this would be a good experience, one that companies like Groupon (or even TownHog) would love to offer. 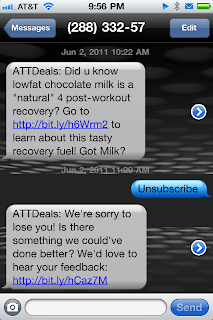 The first offer came in, for a Best Buy 15% off deal. Ok, so it was a few miles from me when it came in, but basically in the ballpark. Not an amazing deal, either, but hey. Not bad. The next was further away...and further away...until the one you see here. Yes, AT&T's version of a local deal was a message about chocolate milk. Not nearby, but just a plug for milk. Seriously. As you can see, that was the last straw: I unsubscribed. 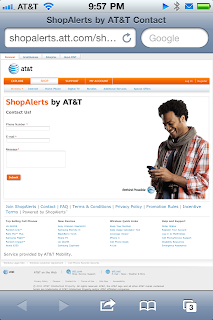 Now, you could take this as a lesson: offer local deals, and the deals better be good, and local. These were neither; they were embarrassing.  I hope they do better with YP.com's new local deals services. But the story does not end there. See, they were smart enough to solicit feedback on why I chose to discontinue using the service. Good move. But when I clicked through to give the feedback? I get a page that looks surprisingly like a page to sign up. Guys, come on: you just had me unsubscribe, you ask for my feedback, and you give me a page that scares me that I might be opting back into this crummy service? Ouch.

This ain't baseball. I gave you two strikes, not the one you usually get, and you still found a way to foul out. Not what I'd call a great deal.