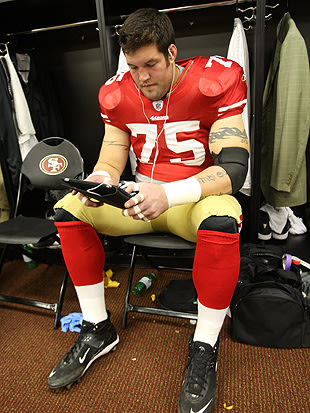 A few months ago, I heralded the impact iPads were having on the NFL. Specifically, the Tampa Bay Buccaneers had ditched their behemoth playbooks for the sleek, infinitely better tablet edition. Unfortunately, in all great movements, there are the occasional setbacks, and this one has temporarily sacked the Bucs.

The players forgot to charge the iPads.

Let me emphasize that again: the Bucs have shifted back (at least for now) to monstrous paper playbooks, losing the ability to have accompanying video and animation, because some players who are paid millions of dollars can't figure out that shiny thing with the 12 hour battery occasionally needs to sip a little performance enhancement? And the Bucs spent the bucks to get those tablets in the hands of the players, but can't run a few power strips and charging cords to the locker room? Seriously?

Look, these players all have cell phones and seem to have them charged with no issue. I'd bet good money that they all have some sort of laptop that has a wire they have figured out can neatly fit in one of those conveniently placed holes in the walls and makes the little light turn green. And a worst case is they have a dead iPad...but wait: I shall perform magic! I shall raise it from the dead with only a small white wire...watch as I touch it to the conveniently sized opening on the iPad...and IT...IS...ALIVE!

C'mon, Tampa. You get kudos for pushing the envelope. Just don't revert because someone can't figure out how to lick a stamp.